Wolkins: North Manchester artists work to be showcased at the Statehouse 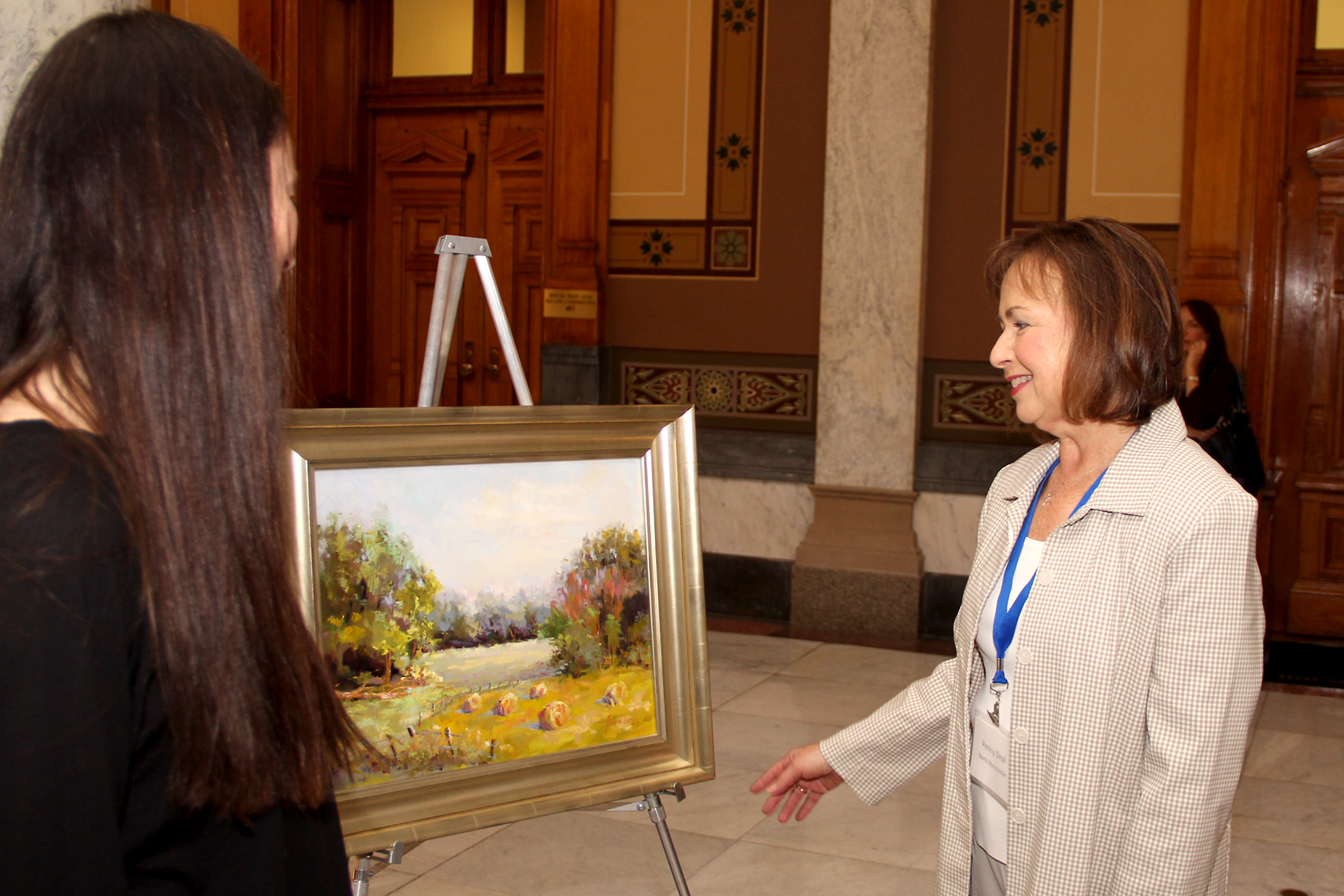 STATEHOUSE (March 21, 2019) – Artwork by a local artists will soon be displayed at the Statehouse, according to State Rep. David Wolkins (R-Warsaw).

Penny Deal and Susan Ring, both of North Manchester, were selected to have their artwork decorate the Statehouse as part of Lt. Gov. Suzanne Crouch’s Hoosier Women Artists initiative. Thirty-three pieces of art were chosen out of more than 220 entries this year.

“These two artists exemplify the quality and beauty of the artwork produced in Wabash County,” Wolkins said. “Not only are they both talented, they have both been selected multiple times over the past few years to have their art displayed at the Statehouse. That is a testament to the dedication both Penny and Susan give to their craft.”

“It’s an honor being down here for a whole year, and to have that traffic pattern of people viewing all of this artwork,” Deal said. “It’s also an honor to be among the people here, to see their artwork and to represent women.”

Wabash County provides much inspiration for Deal’s works of art, and this piece is no different. Deal said she captured a reference photo she worked off of for the painting while traveling through the county.

“’Hay Bales,’ well, that’s the country of Indiana,” Deal said. “It’s so totally our state. In rural Indiana in the summertime is hay. I grew up on a farm. I know what it’s like to work those fields. The challenge of that painting is so much green, in July, and differentiating between those green colors.”

Deal’s artwork has been selected to hang in the Statehouse as part of the artist’s initiative three times now.

“Anytime you’re chosen to be a part of this awards ceremony is an honor, but three times is pretty special,” Deal said. “I’m so happy that they still recognize me, and I’m happy to represent Wabash County and northern Indiana.”

Ring’s work titled, “Following the Light,” will be displayed in Treasurer of State Kelly Mitchell’s office.

“(The Statehouse) is a wonderful venue with the thousands of people that come here each year,” Ring said. “It’s just such an honor to represent Indiana women artists in this way.”

As a four-time winner of this contest, Ring values each opportunity to enter and does not take being selected lightly.

“It’s just always a wonderful surprise,” Ring said. “You never think you’re going to get in. You have to prepare yourself, and then it’s like a shock when you do get in.”

Deal, Ring and other artists were honored at a Statehouse ceremony Wednesday, March 20, 2019, as a part of Women’s History Month.

CAPTION: Penny Deal (right), of North Manchester, speaks with her daughter before the 2019 Hoosier Women Artists awards ceremony on Wednesday, March 20, 2019, at the Statehouse in Indianapolis. Deal’s piece, “Energy,” is an oil painting on Belgian linen, and will hang for one year in Superintendent of Public Instruction Jennifer McCormick’s office.