Solidays proposal to bring data centers to IN advances

Data centers house servers that collect, store and process large amounts of data. According to Soliday, data centers can lead to significant economic growth through job creation and development of other data-dependent industries. Under this legislation, cities and counties may offer property tax exemptions and the state may offer sales tax exemptions to data centers planning to invest at least $25 million.

“Data centers can be billion dollar projects that greatly enhance the economies of the cities and states they locate in through the creation of jobs and strong investments in the community,” Soliday said. “In order to encourage development of this caliber in Indiana, we have to make ourselves competitive and give these companies a reason to choose us over another state.”

This legislation comes as the city of Hammond secured the $40 million Digital Crossroads of America Data Center project. Soliday said this legislation would not only encourage the growth of the Hammond project, but would also help to attract future data centers.

Though Indiana has the space and infrastructure to build data centers, State Rep. Jim Pressel (R-Rolling Prairie) said there is currently no incentive for a company to choose Indiana over another state. He said Google’s recent announcement of their $13 billion plan to build and expand data centers emphasizes the need for financial incentives in Indiana.

“Major data companies like Google are spending billions of dollars on data center projects and looking right past Indiana,” said Pressel, co-author of the bill. “By taking steps to incentivize data companies, we can better compete with other states and further Indiana’s growing reputation as a technology hub.” 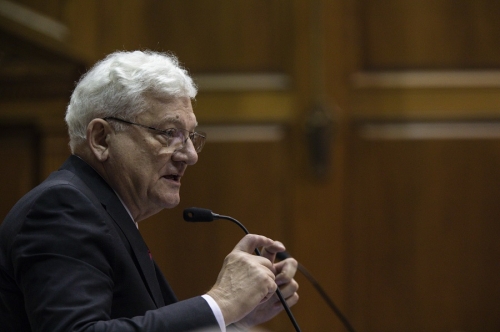 CAPTION: State Rep. Ed Soliday (R-Valparaiso) presents his legislation incentivizing data centers to locate in Indiana Tuesday, Feb. 19, 2019, in the House Chamber. Under Soliday’s proposal, cities and counties may offer property tax exemptions and the state can offer sales tax exemptions to data centers planning to invest at least $25 million in their projects. The bill passed out of the House of Representatives and now moves to the Senate for consideration.