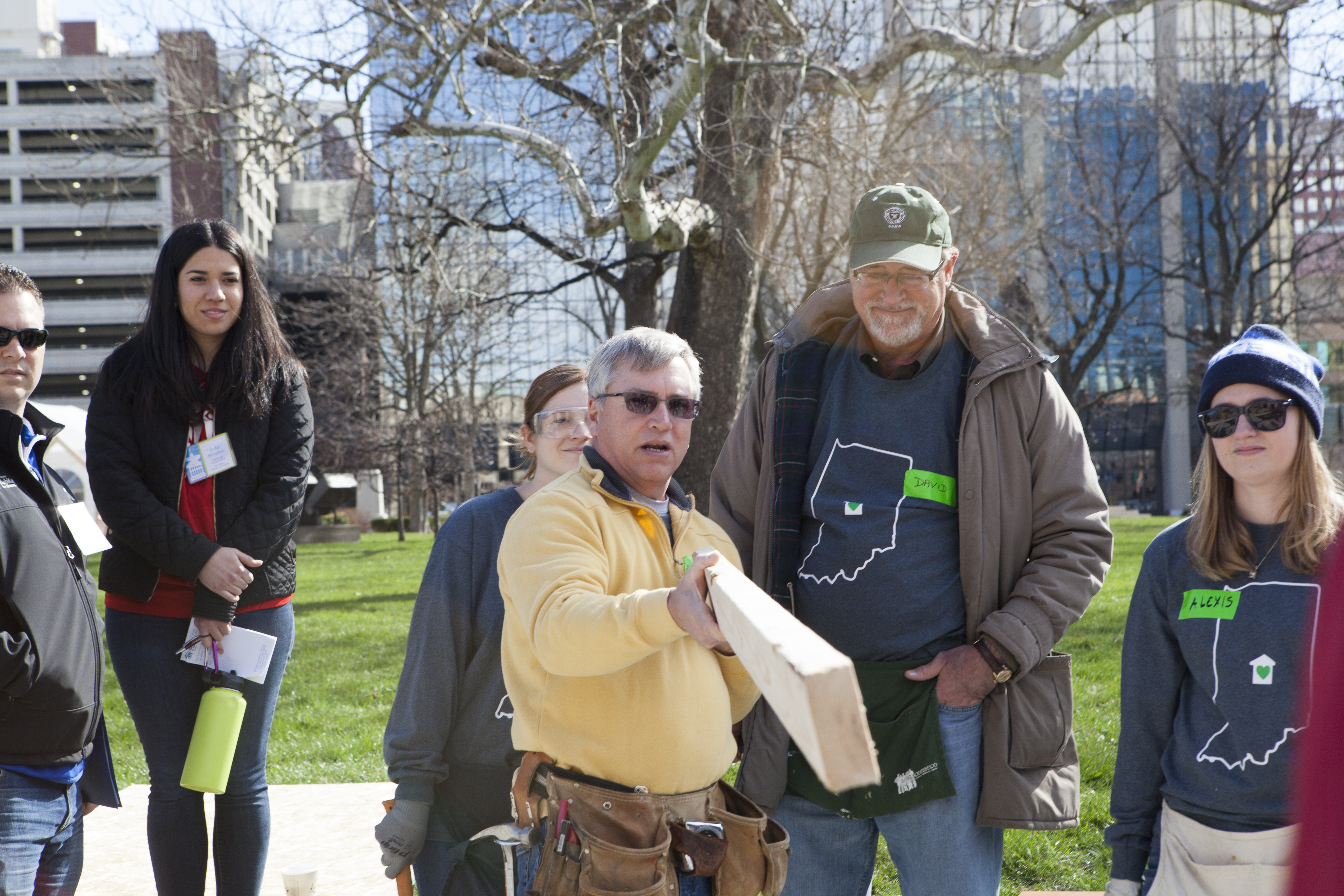 STATEHOUSE (March 9, 2017) – Indiana lawmakers teamed up with Habitat for Humanity of Indiana Wednesday to formally kick off the General Assembly’s first-ever home build on the Statehouse grounds, according to State Rep. Dale DeVon (R-Granger).

DeVon joined fellow members of the Indiana General Assembly, staff and Habitat officials as they worked throughout the day to build the physical panels of a house, which will be used by a single mother and her family in Indianapolis.

“Getting the opportunity to wear a nail apron and swing a hammer made me feel right at home and the fact that the house will be going to a hardworking, Hoosier mother made it even better,” DeVon said. “The work that Habitat for Humanity does for so many deserving families across Indiana is truly amazing and I’m thankful we were able to have a small part in it through the Statehouse build project.”

The results of the project’s  fundraising and tool drive efforts were also announced. In all, funds raised topped $50,500 – far surpassing the initial $30,000 goal to pay for materials and costs of the home’s wall panels. Donations raised beyond the goal will help provide training and support for Habitat’s affiliates in Indiana. Legislators and Statehouse staff also donated about $3,500 in new and used tools.

In January, the Indiana General Assembly announced this unique partnership and their plans to raise the walls of a home for a low-income family and generate awareness of the need for affordable housing. More than 160 volunteers including Statehouse staff and about 60 legislators completed the construction of the wall panels. The panels will then be transported to a home site on the west side of Indianapolis. The completed home will be about 1,200 sq. ft. with three bedrooms and one full bath.

“Habitat is so pleased to have this opportunity to bring our work to the Statehouse for our legislators to experience,” said Habitat for Humanity of Indiana State Director Gina Leckron. “In Indiana, Habitat has 59 affiliates serving 75 counties who have built homes for 5,200 Hoosier families since 1984. Legislators now join the ranks of our thousands of volunteers that make this work happen every day. We are grateful for the partnership with the Indiana General Assembly in fighting poverty housing in our great state.”

Habitat for Humanity of Indiana is a non-profit organization serving 75 counties. The organization sells homes with affordable, interest-free mortgages. To begin the application process, families must demonstrate their ability to pay a mortgage and manage their finances. Once a family is accepted into the program, they contribute sweat equity hours and attend homebuyer education classes.

Homeowners and construction volunteers build under trained supervision and contribute thousands of hours of labor to further reduce home building costs. Individuals, corporations, faith groups and others provide donations that make up the vital financial support needed to build these homes.

A high-resolution photo of DeVon can be downloaded by clicking here.