STATEHOUSE (March 22, 2019) – Local graduates are gaining experience as interns with area lawmakers and their fellow members of the House of Representatives during the 2019 legislative session.

According to State Reps. Michael Aylesworth (R-Hebron) and Ed Soliday (R-Valparaiso), interns play an important role throughout the legislative session.

“Interns are essential to keep things running smoothly both on and off the House floor,” Aylesworth said. “They do a fantastic job, and we are always fortunate to have some of the best and brightest young professionals here at the Statehouse.”

The following Region graduates are currently interning at the Indiana Statehouse:

“The House internship program is a great way for students and graduates across the state to gain experience and learn more about the legislative process,” Soliday said. “I’m pleased to see so many talented young people from our community interning this session, and I hope to see even more next year.”

Each year, the House of Representatives offers paid internship opportunities to college students, law-school students, graduate students and recent college graduates for the duration of each legislative session. 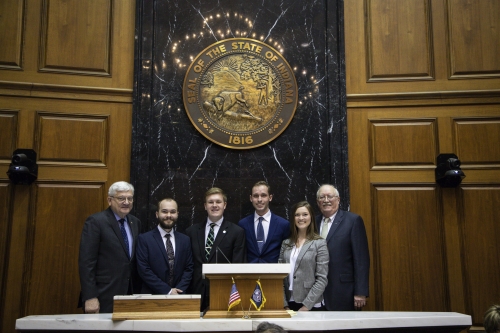