Currently, it is illegal for motorists to text while driving. However, Pressel said this law is difficult to enforce and many drivers continue to use their devices for things other than texting, like checking social media or playing games.

Under the legislation, Pressel said drivers in Indiana could not hold a cell phone or electronic communication device while driving.

“Distracted driving takes the lives of at least nine Americans every single day,” Pressel said. “No social media notification or text message is worth risking your life or someone else’s. This proposal would help deter drivers from holding their phones behind the wheel so they can focus their attention on the road where it belongs.”

Under the legislation, Pressel said a motorist could still use their device to make calls in hands-free mode or in place of a GPS on the dash of their vehicle. However, he said they would not be permitted to hold the device in their hand.

According to Pressel, 21 other states have already implemented “hands-free device driving laws.” He said if passed, the bill would also implement a comprehensive and statewide educational campaign to inform Hoosiers of the change. 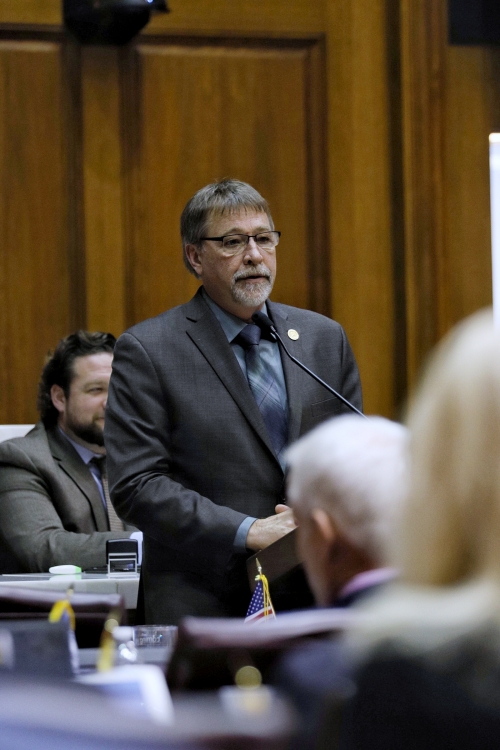 CAPTION: State Rep. Jim Pressel (R-Rolling Prairie) discusses legislation he is working on to prohibit holding a hand-held electronic device while driving Wednesday, Jan. 29, 2020, at the Statehouse in Indianapolis. With the legislation, motorists could still use devices to make calls in hands-free mode or in place of a GPS on the dash of vehicles, but would not be permitted to hold devices in their hands. The bill passed the House of Representatives and is now eligible for action in the Senate.