“When children are boarding or exiting a school bus, the stop arm extends and lights flash to signal other drivers on the road to stop,” Pressel said. “Some people are unaware of traffic laws regarding school buses, while others disregard the law altogether. By increasing penalties for drivers who endanger our children, we can help deter this negligence.”

The law also improves safety by ensuring school corporations review bus routes each year and avoid making students cross state highways to board or get off a school bus.

Pressel said this law stems from a tragedy that happened in Fulton County last year that claimed the lives of three children who were struck by an oncoming vehicle as they crossed the road to board their school bus.

Pressel has been an advocate for safe and responsible driving, working on legislation to address distracted driving and school bus safety over the last year.

“After hearing from school bus drivers and parents in our community last summer, I began working on ways to improve safety on the roads for our children as well as other motorists,” Pressel said. “This new law is an important step forward for school bus safety, but there is still more that needs to be done. I will continue working on this issue to better protect Hoosier children and motorists on the roads.” 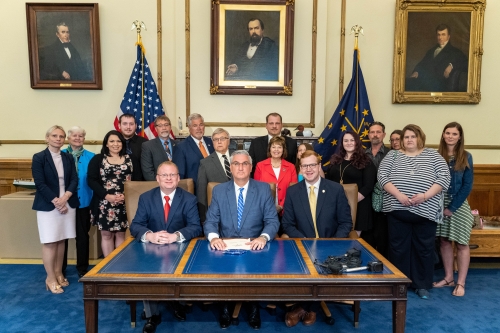 CAPTION: Gov. Eric Holcomb (seated, center) signs legislation co-sponsored by State Rep. Jim Pressel (R-Rolling Prairie) (standing, fifth from left) strengthening penalties for individuals who fail to stop when a school bus stop arm is extended Wednesday, May 29, 2019, at the Statehouse. Pressel said this new law stems from a tragedy in Fulton County last year that claimed the lives of three children who were struck by an oncoming car as they crossed the road to board their school bus.