STATEHOUSE (March 7, 2017) – Area legislators laced up their sneakers with their suits today at the Statehouse to help raise cancer awareness.

The Suits and Sneakers challenge is an annual event sponsored by the American Cancer Society and the National Association of Basketball Coaches to help raise cancer awareness and support those affected by the disease.

“More than 32,000 Hoosiers are diagnosed with cancer annually and this event is a great way to raise awareness,” State Rep. David Wolkins (R-Warsaw) said. “Hoosiers struggling with this disease should know they are not alone in their fight.”

“As a new legislator, I was excited to wear my sneakers for the first time on Suits and Sneakers day,” State Rep. Jim Pressel (R-Rolling Prairie) said. “Many families in our community have felt the impact of cancer and today’s event shows that we stand with them in support.”

“Whether you yourself is battling cancer or are supporting a loved one that has been diagnosed, this is a devastating disease that has impacted nearly every Hoosier in one way or another,” Miller said. “Increasing awareness is a small step in what we can do to change the way we see cancer and finding a cure for this horrible disease.”

“As elected officials, it’s important we continue to support the Hoosier families who have struggled with cancer,” State Rep. Jack Jordan (R-Bremen) said. “By wearing sneakers for the day, we can come together to raise cancer awareness and show the members of our community affected by this disease that we are here for them.”

“I was honored to join my fellow legislators today to support the American Cancer Society and their efforts to raise awareness and fight against this terrible disease,” said State Rep. Curt Nisly (R-Goshen).

“Participating in Suits and Sneakers is a Statehouse tradition that we look forward to every year,” State Rep. Tim Wesco (R-Osceola) said. “Cancer is the second most common cause of death in the U.S., exceeded only by heart disease, and it’s important we continue our fight to find a cure.”

Visit www.cancer.org for more information on how to help spread awareness and fight back against cancer.

includes all of Marshall County and a large portion of Fulton County.

which includes portions of Elkhart and St. Joseph counties. 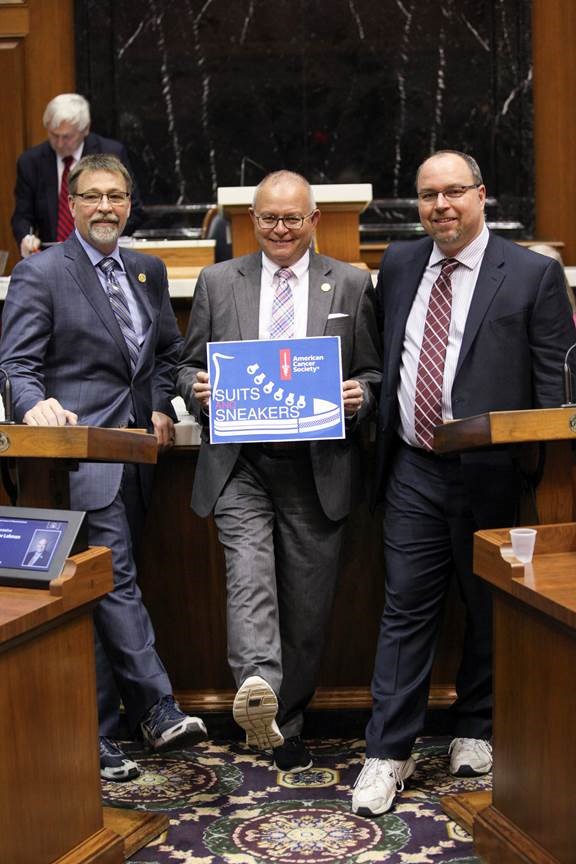