Organized retail theft occurs when retail goods are stolen with the intention of reselling them. Negele said thieves used to primarily resell stolen items to pawn shops, but online forums like Craigslist and Facebook Marketplace have made it even easier to turn a quick profit.

“Theft is a serious problem for retailers across the country,” Negele said. “Under current Indiana law, organized theft rings are able to escape punishment by keeping the volume of stolen goods below $750, which is the felony level. By enhancing penalties, we can ensure criminals receive the punishment they deserve and better deter organized theft going forward.”

Currently, theft below $750 is classified as a Class A misdemeanor, and theft between $750 and $50,000 is a Level 6 felony. Under Negele’s legislation, a prosecutor may charge a person who makes an enterprise of selling stolen retail property on the internet with a Level 6 felony, even if the value of the stolen property is less than $750. Similarly, the punishment for stolen items with a value greater than $750 would be raised to a Level 5 felony.

According to Negele, every neighboring state has a law addressing organized retail theft. As a result, she said criminals target Indiana, leaving Hoosier retailers vulnerable.

“Due to higher rates of organized theft, some retailers have been forced to raise prices,” Negele said. “This punishes law-abiding Hoosiers. My legislation would crack down on the appropriate people without unintentionally penalizing the average consumer.” 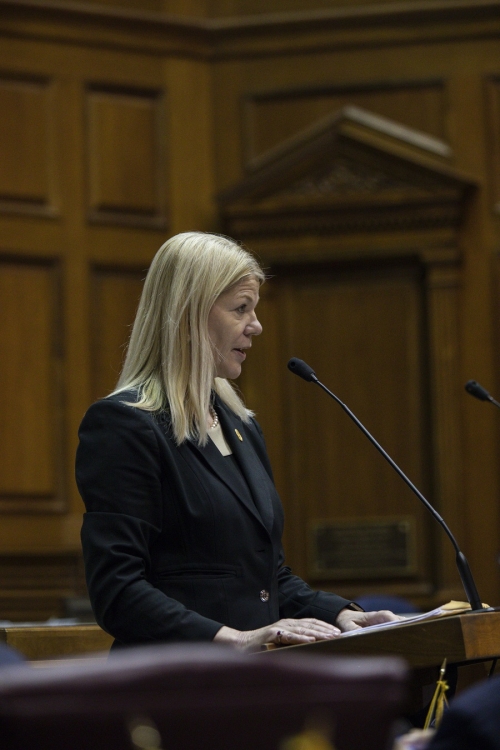 CAPTION: State Rep. Sharon Negele (R-Attica) presents her legislation enhancing penalties for organized “shoplifting” Tuesday, Feb. 19, 2019, in the House Chamber. According to Negele, organized theft rings are able to escape punishment under current Indiana law by keeping the volume of stolen goods below $750, which is the felony level. The bill passed out of the House of Representatives and now moves to the Senate for consideration.