According to May, the Brilliant Firefly award is named after the official state insect, the Say’s Firefly, and was created by Lt. Gov. Suzanne Crouch to honor young Hoosiers who have shown exceptional academic achievement and community leadership.

“Tanner Bowman has been an inspiration to fellow students and citizens through his leadership, as well as his involvement at school and around the Brown County area,” May said. “He places the needs of his classmates and community ahead of his own.”

As a student, Bowman served as president of the Brown County High School History Club, a reporter for the school’s Talon online news source and as a member of BCHS’ national champion We the People civics team. He also represented his school at the Lugar Symposium for Tomorrow’s Leaders and on the Indiana Legislative Youth Advisory Council. As well, Bowman was a regional winner of the Veterans of Foreign Wars’ Voice of Democracy essay contest.

In addition to being an engaged student, Bowman is also active in the community. He has participated in the annual 9/11 memorial ceremony in Indianapolis the past two years and laid flags on veterans’ gravesites in Brown County every Memorial Day for the last three years. Bowman also serves as a production manager at Eagle Manufacturing, a student-led business in Brown County. That role gave him the ability to speak at the annual meeting of Regional Opportunity Initiatives, Inc.

“Tanner’s outstanding work has not gone unnoticed by citizens in his community,” May said. “His initiative and dedication have earned him an excellent reputation. Tanner is a prime example of the talented and bright students we have in our community.” 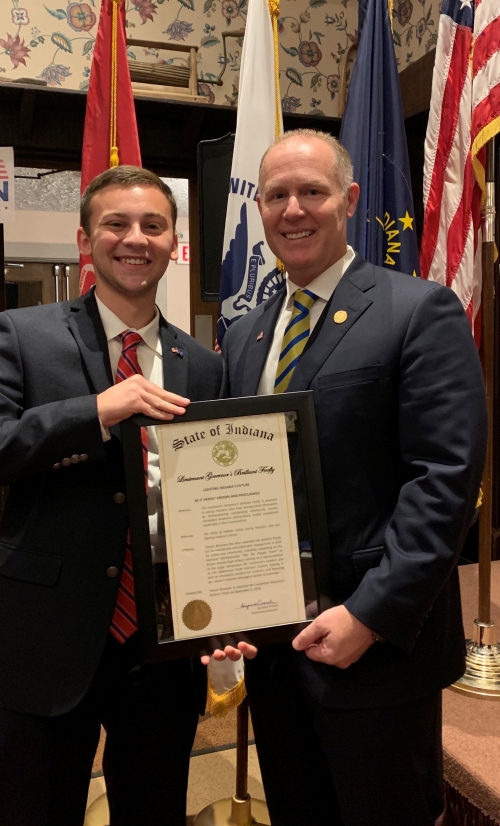 Photo Caption: State Rep. Chris May (R-Bedford) honors Tanner Bowman with the Brilliant Firefly award during an event at The Seasons Lodge in Nashville, Ind., on Friday, Nov. 1. The Brilliant Firefly is named after the official state insect and recognizes young Hoosiers who demonstrate exceptional academic achievement, leadership and community service.

State Rep. Chris May (R-Bedford) represents House District 65, which includes all of
Brown County, most of Lawrence County and parts of Monroe, Jackson and Johnson counties.
Click here to download a high-resolution photo.