May honors three Bedford citizens with Circle of Corydon award 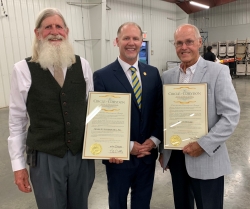 Corydon award during the Bedford Chamber of Commerce’s annual dinner.

“Adele Bowden-Purlee, Byron Buker and Mark Scherschel are known as engaged citizens and valued friends to many,” May said. “Day or night, they can be counted on as a source of information and to help those in need. Their never-ending efforts to improve our community – combined with their great character and outstanding reputations – has led to them being known throughout Bedford as some of its outstanding leaders.”

Gov. Eric Holcomb established the Circle of Corydon in 2017 to recognize Hoosiers who have made remarkable contributions to the betterment of Indiana and its people, demonstrating through life and service qualities exemplified by the state’s greatest citizens.

Bowden-Purlee has been actively involved in public service for more than 40 years, including 25 as former president of the Bedford Area Chamber of Commerce and eight years on the Bedford City Council. Currently she serves as director of the community’s Success & Opportunity At Reading program and on various boards and commissions.

Buker is president of the Bedford City Council and is appointed to the city’s Board of Public Works and Safety. He has served his community with distinction for over 25 years.

Scherschel’s tenure on the Bedford City Council has been so influential that the room where the council meets was renamed after him in 2015. He is also a past president of Bedford Revitalization Inc. and the city’s redevelopment commission.

All three will step away from the Bedford City Council at year’s end.

“We have some big shoes to fill,” May said.

State Rep. Chris May (R-Bedford) represents House District 65, which includes all of Brown County, most of Lawrence County and parts of Monroe, Jackson and Johnson counties. Click here to download a high-resolution photo.

PHOTO CAPTION: State Rep. Chris May (R-Bedford) (center) presents longtime Bedford City Council members Mark Scherschel Sr. (left) and Byron Buker (right) with Circle of Corydon awards for their contributions to the state of Indiana. May also presented a Circle of Corydon to former council member Adele Bowden-Purlee, who was unable to attend the ceremony.