Martinsville student learns about being a lawmaker with Mayfield

STATEHOUSE (Nov. 25, 2019) – Courtney Burnam, an eighth-grader at Martinville’s John R. Wooden Middle School, recently spent the day with State Rep. Peggy Mayfield (R-Martinsville) for a college and career prep class to learn about her role as a state representative during Organization Day at the Statehouse.

Organization Day marks the annual ceremonial start of the upcoming legislative session, and is an opportunity for the General Assembly to organize and preview their agendas.

“I really enjoyed taking Courtney behind the scenes at the Statehouse and introducing her to interest groups to learn what they do in the legislative process,” Mayfield said.

Burnam also observed notable events while at the Statehouse.

“I was only expecting to attend the Organization Day ceremonies, but I experienced much more,” Burnam said. “I witnessed thousands of teachers attend the Red for Ed rally and Speaker Brian Bosma announce his retirement. There is so much more to the job of a legislator than most people think.”

Mayfield said it’s important for young people to job shadow or serve as pages, which are students who help General Assembly staff with daily duties during the legislative session. Experiences like these reveal the possibilities of various careers they might not have considered before.

“Students are curious and not afraid to ask what’s on their mind,” Mayfield said. “They’re often surprised at the number of people, the multitude of state agencies and all of the different groups interested or involved in the legislative process. I tell them that no matter what career you may pursue, every profession is represented in the Statehouse in some way. I would encourage employers from every profession to invite students to job shadow. You never know when a young person may discover a new interest or something they could excel at through such opportunities.” 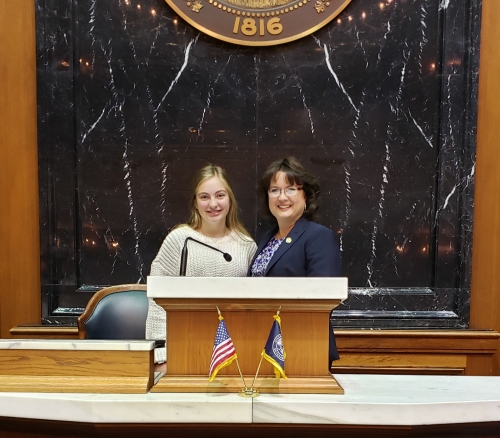 PHOTO CAPTION: Courtney Burnam, a student from Martinsville, joins State Rep. Peggy Mayfield (R-Martinsville) on Tuesday, Nov. 19, at the Statehouse in Indianapolis during Organization Day. Burnam spent the day with Mayfield for a college and career prep class to learn about her role as a state representative.

State Rep. Peggy Mayfield (R-Martinsville) represents House District 60,
which includes portions of Morgan and Monroe counties.
She is the assistant majority floor leader and serves
on the House Ways and Means, Public Policy and Insurance committees.
Click here for a high-resolution photo.