Local legislators return to the Statehouse for Organization Day

State Reps. Michael Aylesworth (R-Hebron) and Ed Soliday (R-Valparaiso) were among those who met for the ceremonial start of the 2019 legislative session.

“Organization Day is always a very busy and exciting day,” Aylesworth said. “It’s a great start to the upcoming legislative session, as we prepare to craft the state’s biennial budget and work on legislation to address issues facing the state.”

“There are many families in Indiana who struggle to make ends meet, and unfortunately, their children can go hungry as a result,” Soliday said. “House lawmakers are eager to do what they can to raise awareness of this issue so that Hoosier children don’t have to go hungry.”

Constituents who want to stay informed about the Indiana General Assembly and members of the House of Representatives can sign up to receive legislative email updates at www.IndianaHouseRepublicans.com. 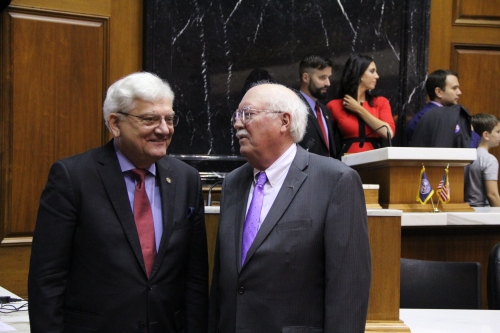