The Wolves clinched the IHSAA Class 2A state championship after edging the Southridge High School Raiders 5-4 at Victory Field in Indianapolis. Led by first-year head coach Patrick Antone, Boone Grove achieved its first-ever state title in any sport and compiled a 22-5 record.

“The Wolves’ incredible season is a testament to all their hard work and determination,” Aylesworth said. “After earning the school’s very first state title, these young men’s efforts will forever be remembered.”

“This team worked tremendously hard throughout their season and now have a state championship to show for it,” Olthoff said. “The community is proud of all their efforts, both on and off the field.”

Individual accomplishments also helped propel the Wolves in the state championship game. Senior left-hander Ty Bothwell pitched six innings before Bryce Morris relieved him in the bottom of the seventh. Morris then provided the pitching for the final out, a popup to the shortstop. 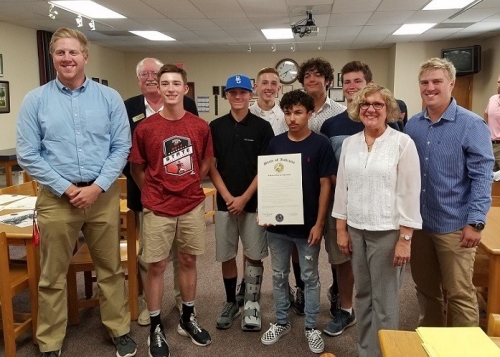 PHOTO CAPTION: State Reps. Michael Aylesworth (second from left) and Julie Olthoff (second from right) on Thursday, Aug. 9, 2018, at the Porter Township School Board meeting present the Boone Grove High School baseball team a resolution honoring their state championship title. The Wolves clinched their IHSAA Class 2A state championship with a close victory over the Southridge Raiders, achieving the school’s first-ever state title in any sport.