According to the American Conservative Union Foundation, Jordan voted consistently with the ideas articulated in the U.S. Consititution, including limited and transparent government, individual rights, and personal responsibility.

“I value the beliefs and opinions of the people from our community, and take great pride in representing them at the Statehouse,” Jordan said. “I am honored to receive this recognition, and I will continue to serve our area to the best of my ability.”

Of the 150 members of the Indiana General Assembly, Jordan was one of only nine legislators recognized with this distinction.

Eligibility for this award is determined by thorough analysis of each vote to create annual state scorecards. These ratings then allow the organization to recognize legislators with shared conservative values.

The American Conservative Union Foundation is an organization that advocates for conservative policies through education, congressional ratings and their annual Conservative Political Action Conference.

State Rep. Jack Jordan (R-Bremen) represents House District 17,
which includes all of Marshall County and a portion of Fulton County. 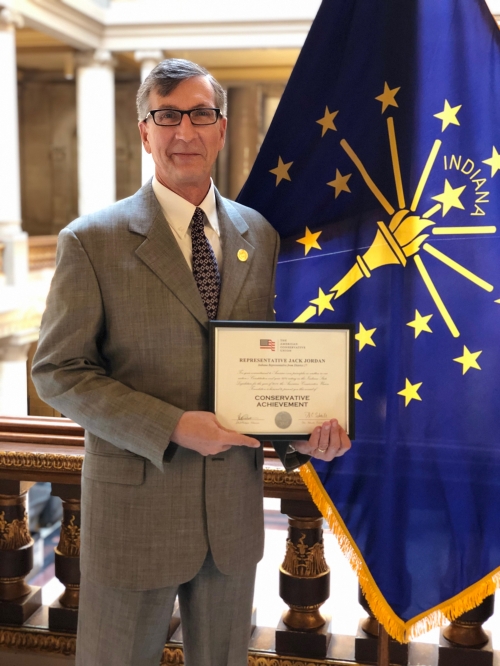 CAPTION: State Rep. Jack Jordan (R-Bremen) receives the Award for Conservative Excellence from the American Conservative Union Foundation. Jordan was recognized for his conservative voting record during the 2018 legislative session.