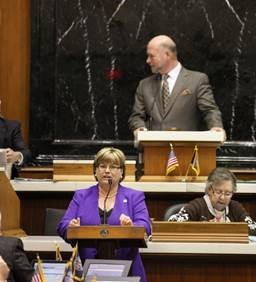 Currently, state law requires health practitioners to report patients, regardless of age, suspected of human trafficking to social services and local law enforcement. If victims are 18 years old, they can be arrested for prostitution when turned in to authorities and possibly face retribution from their trafficker. Engleman said this discourages adult victims from seeking help.

“Victims of human trafficking should be empowered by state laws, rather than scared to seek medical advice and care,” Engleman said. “This legislation would help take away some of this fear by abolishing the mandatory reporting requirement for health care professionals and replacing it with a requirement that they share information on the resources and services available to victims.”

According to Engleman, numerous health care providers have indicated the current mandatory reporting requirement has been difficult to enforce and might have a chilling effect on victims seeking medical care. Most providers are not trained in spotting the signs of human trafficking and may over report suspected cases out of fear of losing their license under the current statute.

Instead, Engleman’s legislation would encourage and require licensed providers to offer information about community resources and services, such as a hotline, to adult patients suspected of being human trafficking victims. Advocates and medical professionals testified that adult victims are more likely to consider and seek assistance through non-coercive consultations.

The bill would not affect state laws concerning patients age 17 years or younger. Healthcare providers would still be required to contact the Department of Child Services when they encounter underage patients who they think could be victims of human trafficking.

House Bill 1191 can now move to the Senate for consideration. For more information, visit iga.in.gov.

A high-resolution photo of Engleman can be downloaded by clicking here.