According to Soliday, many people in Northwest Indiana depend on the University of Chicago Medical Center because the region does not have its own Level I trauma center, which provides the highest level of surgical care for trauma patients. The hospital is located just west of the Indiana state line, and Soliday said families utilize this location to obtain life-saving emergency treatment sooner, rather than making the three-hour drive to Indianapolis-based trauma centers.

“When a child from our area is in need of life-saving care, there may not be time to transport them to an appropriate Indianapolis hospital,” Soliday said. “We’re fortunate to have such an exceptional trauma center so close to our region.”

Currently, Indiana reimburses the University of Chicago at the out-of-state Medicaid rate, which is less than the in-state rate. Under Soliday’s legislation, reimbursements would be issued at the same rate as in-state hospitals. Soliday said this would ensure Northwest Indiana patients age 6 and younger could continue to receive the emergency care they need.

“The University of Chicago provides excellent care for Northwest Indiana children in urgent need of treatment,” Soliday said. “By reimbursing the Chicago hospital the same as we would any other Indiana facility, Region parents and their children can continue receiving quality treatment without having to travel hours from home.”

Soliday said his legislation would repay the University of Chicago through a pilot program established by the Family and Social Services Administration. Data would be collected to determine whether out-of-state Medicaid reimbursement should be expanded to other regions of the state. 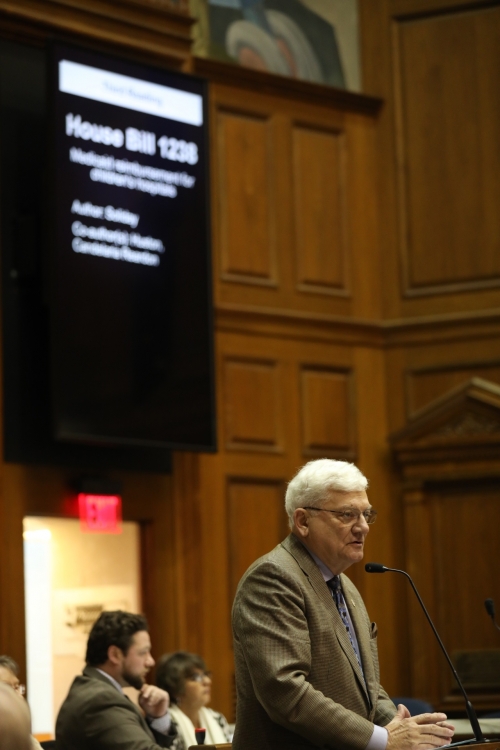 CAPTION: State Rep. Ed Soliday (R-Valparaiso) presents his legislation ensuring Medicaid-covered treatment for Northwest Indiana children seeking care at the University of Chicago Medical Center Monday, Feb. 11, 2019, in the House Chamber. Under Soliday’s proposal, the Chicago hospital would be reimbursed the same as other in-state facilities, so children in the area could continue receiving the life-saving care they need closer to home. After a unanimous vote of support in the House of Representatives, the bill now moves to the Senate for consideration.