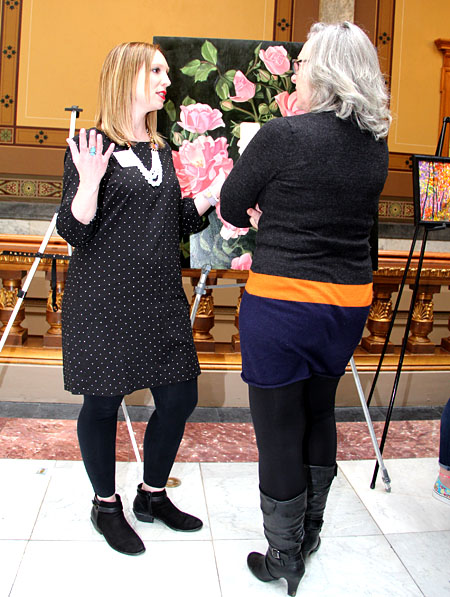 STATEHOUSE (March 22, 2018) — Artwork by local artists will soon be on display at the Statehouse, according to State Reps. Martin Carbaugh (R-Fort Wayne) and Bob Morris (R-Fort Wayne).

The Fort Wayne legislators said Carolyn Stachera and Katherine Rohrbacher were selected to have their artwork decorate the Statehouse as part of Lt. Gov. Suzanne Crouch’s Hoosier Women Artists 2018 initiative.

“These artists and their works are inspirational,” Carbaugh said. “Now, people visiting will be able to witness the talents of our community artists.”

Rohrbacher, from Fort Wayne, will have her oil painting, titled “Pause,” displayed in the lieutenant governor’s office. She said she hoped the painting “encourages us to pause and appreciate the beauty of life amid a chaotic world.”

Stachera, also from Fort Wayne, will have her oil painting, titled “Golden Morning in BiCentennial Woods,” displayed in the lieutenant governor’s office. She said her walks in the northeast Indiana nature preserve inspired the painting.

“The Summit City has a pool of amazing talent, which is evident in the work of Katherine and Carolyn,” Morris said. “Congratulations to both of these artists on these awards and recognition by the lieutenant governor at the Statehouse.”

Rohrbacher, Stachera and others were honored at a Statehouse ceremony on Wednesday, which recognized the talents of women throughout Indiana.

In celebration of Women’s History Month in March, the Hoosier Women Artists initiative is an annual contest recognizing the importance of the arts by showcasing drawings, paintings and photography.

which includes Washington and portions of Wayne townships in Allen County.

which is portions of St. Joseph and Perry townships in Allen County.

Photo Caption: Katherine Rohrbacher (left) of Fort Wayne, speaks with another artist following the 2018 Hoosier Women Artists awards ceremony on Wednesday, March 21, 2018, at the Statehouse in Indianapolis. Rohrbacher’s piece “Pause,” a 36x36-inch oil painting, will hang for one year in the lieutenant governor’s office.

Photo Caption: Fort Wayne artist Carolyn Stachera was honored at the Hoosier Women Artists 2018 awards ceremony on Wednesday, March 21, 2018, at the Statehouse in Indianapolis. Stachera’s oil painting, “Golden Morning in BiCentennial Woods,” will hang in the lieutenant governor’s office for one year.