DeVon: Local artists work to be showcased at the Statehouse 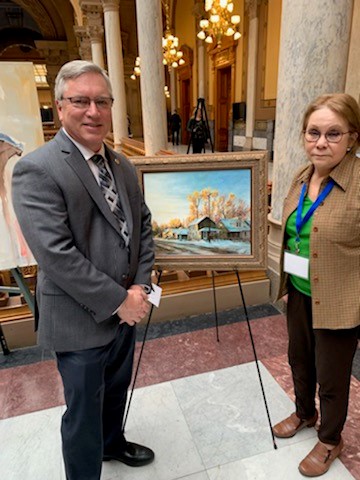 STATEHOUSE (March 21, 2019) – Artwork by a local artist will soon be displayed at the Statehouse, according to State Rep. Dale DeVon (R-Granger).

Charlene Long of Mishawaka was selected to have her artwork decorate the Statehouse as part of Lt. Gov. Suzanne Crouch’s Hoosier Women Artists initiative.

“Indiana is home to so many talented women artists,” DeVon said. “We are honoring women like Charlene by displaying their artwork around the Statehouse for an entire year. My hope is that this artwork is inspirational and encourages other Hoosiers to create their own art.”

Long’s work titled, “Early Morning Glow,” will be displayed in the Indiana Department of Education’s office.

She and other artists were honored at a Statehouse ceremony as part of Women’s History Month.

PHOTO ATTACHED
CAPTION: State Rep. Dale DeVon (R-Granger) (left) joins Mishawaka artist Charlene Long (right) during the Hoosier Women Artists reception Wednesday, March 20, 2019, at the Statehouse in Indianapolis. Long was chosen to have her artwork, “Early Morning Glow,” displayed in the Indiana Department of Education’s office for the next year.