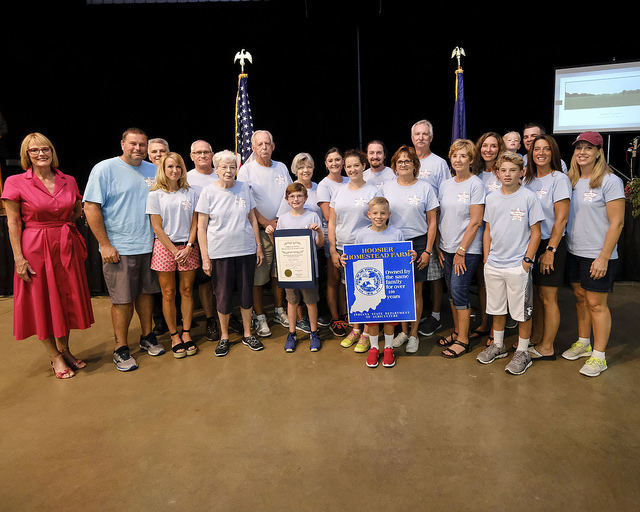 STATEHOUSE (Aug. 16, 2018) — The Robert Thompson Farm was recognized Friday at the Indiana State Fair for being in operation for 133 years, according to State Sen. Susan Glick (R-LaGrange) and State Rep. Denny Zent (R-Angola).

The Robert Thompson Farm, located in LaGrange County and in operation since 1885, received a Hoosier Homestead Centennial Award.

“Congratulations to the Robert Thompson family on the ownership of their farm for 100 years,” Glick said. “The State of Indiana and rural America were settled by pioneers who envisioned a future for themselves and generations yet to come. Through hard work and monumental struggles, families like the Thompsons have preserved that portion of the American dream. This family farm’s Hoosier Homestead Award is a significant achievement worthy of commemorating.”

“Over 100,000 Hoosier jobs are supported by Indiana agriculture,” Zent said. “Family-owned farms like the Robert Thompson Farm contribute to sustaining Indiana’s resources while fueling economic growth throughout our state.”

includes most of LaGrange and Steuben counties.