Negele said the new law creates the Women’s Suffrage Centennial Commission, which will organize and promote activities to celebrate the 100th anniversary of the Nineteenth Amendment.

“We owe so much to the generations of Hoosier women who came before us,” Negele said. “They worked tirelessly to have women’s voices heard, and I am honored to play a role in creating the commission to commemorate their achievements.”

Negele worked closely with Lt. Gov. Suzanne Crouch on the legislation creating the commission and promoting this milestone in America’s history.

“I am continually inspired by the groundbreaking efforts women have made to ensure equality when voting,” Crouch said. “We are forever in their debt, because without their work, Indiana would not have such a strong force of female leaders in local and statewide positions.”

According to Negele, the Nineteenth Amendment was adopted on Aug. 18, 1920, to prohibit state and federal governments from denying women the right to vote. Indiana was the 26th state to ratify the amendment during a special session on Jan. 16, 1920. 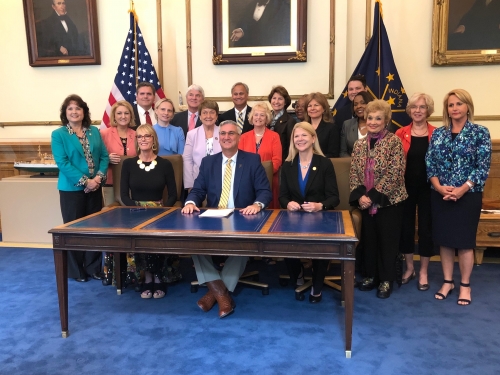