STATEHOUSE (Feb. 13, 2019) — The House of Representatives recently voted in support of legislation co-authored by State Rep. Sharon Negele (R-Attica) that would establish a temporary payment program for unpaid traffic fines.

Currently, there are approximately 380,000 Hoosiers with suspended licenses due to an inability to pay. Under this legislation, a court could reduce the traffic fines owed by a person and establish a payment plan.

“Often times, people owing large traffic fines cannot afford them, pay nothing and lose their licenses,” Negele said. “By establishing an amnesty program and providing an alternative to paying these fees, we can help them regain their driving privileges. This would enable them to get back to work, while ensuring they pay at least a portion of what they owe for their violations.”

Under the bill, licenses could be reinstated, but the person must pay their remaining balance, either all at once or through the payment plan determined by the court. They would also need to show proof of insurance and be eligible to have their driving privileges reinstated. The person would not be required to pay a court filing fee, but would pay a $50 installment fee only if amnesty was granted and a payment plan was set up.

Negele said despite forgiving large percentages of traffic fees owed, state revenue would actually increase under the amnesty program. Since those facing large traffic fines are often unable to pay the full amount owed, the program would help ensure they pay at least a portion of what they owe to the state.

The program would run from Jan. 1, 2020 to July 1, 2021, and would apply to those with infractions committed before Jan. 1, 2017. Negele said at the end of that timeframe, state officials could then analyze the effectiveness of the program and determine whether it should be extended. 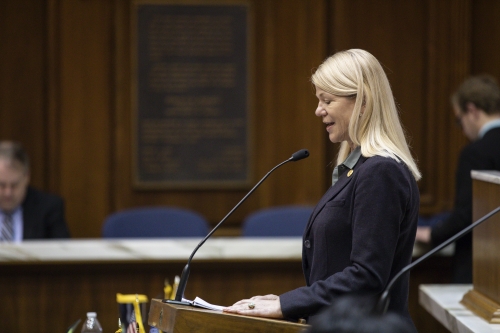 CAPTION: State Rep. Sharon Negele (R-Attica) speaks on legislation she co-authored establishing a temporary payment program for unpaid traffic fines Tuesday, Feb. 12, 2019, in the House Chamber. The bill passed out of the House of Representatives and now moves to the Senate for consideration.