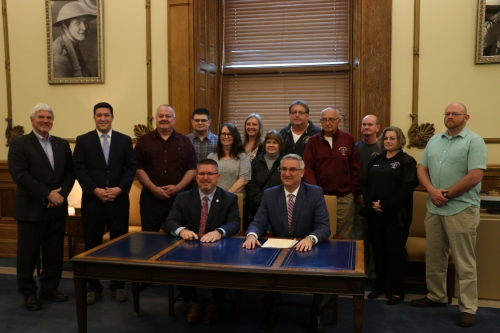 According to Mahan, EpiPens are used by paramedics and EMTs in response to life-threatening situations caused by asthma or severe allergic reactions. Epipens cost anywhere from $360 to $600 per dose and can put a financial burden on local emergency service budgets.  He said Epipens are not only expensive, but they also have a relatively short shelf life of about 18 months. This new law gives EMTs the flexibility to administer epinephrine through a pre-loaded syringe or by loading their own syringes, which is less expensive.

“During a listening tour, I met with a group of EMTs who brought this issue to my attention,” Mahan said. “They told me how expensive EpiPens are and that there is a much more affordable option out there. Using a syringe and an ampule, they could withdraw epinephrine and inject it, something every EMT can be easily trained and certified to do. This could reduce spending on epinephrine from $600 per dose, to around $10 per dose. With today’s signing, these trained professionals can now stock their trucks with the more affordable option, removing a major strain on their budgets.”

Blackford County and portions of Delaware, Grant and Wells counties.

A high-resolution photo of Mahan can be downloaded by clicking here.