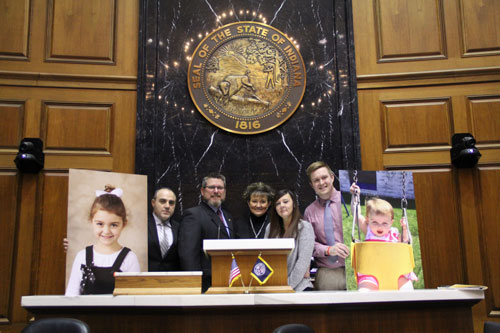 Sepsis is a serious condition resulting from a harmful infection that spreads to the bloodstream or other important tissues, triggering a chain reaction throughout the body. Without timely treatment, sepsis can cause tissue damage, organ failure and death.

“Sepsis is the leading cause of deaths in hospitals,” Mahan said. “Too many lives have been lost because this condition was not caught in time. We need to make sure our hospitals have the right tools to find and treat sepsis early on and prevent it from claiming more Hoosier lives.”

Sepsis often goes undiagnosed in hospitals because early symptoms can suggest other disorders. For every hour sepsis is not diagnosed the mortality rate climbs between 3 and 4 percent, according to the New England Journal of Medicine.

Mahan’s legislation would ensure hospitals adopt, implement and update sepsis-based protocols in order to recognize and treat sepsis, severe sepsis and septic shock early. The bill would establish the Sepsis Treatment Protocol Task Force, which would be charged with developing best practices and providing recommendations to the Indiana State Department of Health. The ISDH would be responsible for developing and implementing the new protocol training.

Two families traveled to the Statehouse to share their stories of how they lost their loved ones to sepsis. Lee Ann, Trevor and Jessica O’Hern spoke of Jessica’s daughter, Josslyn Gee, who was an infant when she lost her life to sepsis. Tony Galbo, Sepsis Alliance advisory board member, spoke of his five-year-old daughter, Gabby Galbo, who was also a victim of sepsis and died.

“These two precious kids are no longer with us because of sepsis,” Mahan said. “It’s a tragedy and we need to take action. State lawmakers appreciate the family members who told their stories. It was impactful testimony that really spoke to why Indiana needs to implement these protocols.”

Symptoms of sepsis include a high heart rate, fever, shivering, confusion, shortness of breath, extreme pain and clammy skin. It is important to seek medical attention immediately with sepsis.

House Bill 1275 can now be considered by the full House of Representatives. To learn more, visit iga.in.gov.

which includes all of Blackford County and portions of Delaware,

Photo Caption:  (Pictured left to right) Sepsis Alliance advisory board member Tony Galbo, State Rep. Kevin Mahan (R-Hartford City), Lee Ann O’Hern, Jessica O’Hern and Trevor O’Hern join the House Committee on Public Health at the Statehouse Wednesday, Jan. 30, 2019, to give testimonials on Mahan’s legislation that would require hospitals to have sepsis based protocols in order to recognize and treat the condition earlier. These families shared pictures of their children, Gabby Galbo (left) and Josslyn Gee (right), both of whom passed away from sepsis.