STATEHOUSE (Jan. 31, 2019) – State Rep. Sharon Negele’s (R-Attica) legislation cracking down on synthetic drug dealers and manufacturers advanced out of the House of Representatives on Tuesday.

Synthetic drugs, like spice or bath salts, have properties and effects similar to other illegal drugs, including marijuana and cocaine. Currently, the penalty for dealing or possessing a synthetic drug ranges from a Class A infraction to a Class C misdemeanor. Negele said these penalties are insufficient given a synthetic drug’s potency and danger, and sentencing should be in line with current controlled substance laws.

“Synthetic drugs have the same powerful effects as the drugs they imitate, yet dealers are sentenced as though these are the lowest-level drugs out there,” Negele said. “Increasing penalties to mirror those of the drug they mimic will get these criminals off the streets and help curb the manufacture and distribution of future synthetic drugs.”

Negele’s legislation would also give prosecutors criteria to consider when determining whether a substance is mimicking a controlled substance. Negele said this would grant more flexibility to convict dealers and manufacturers who design the substances to look and act like other known illegal drugs. 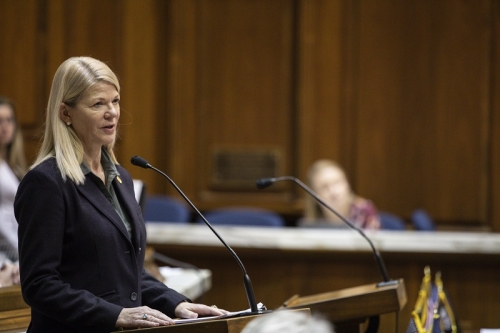 CAPTION: State Rep. Sharon Negele (R-Attica) presents her legislation cracking down on synthetic drug dealers and manufacturers Tuesday, Jan. 29, 2019, in the House Chamber. Under Negele’s proposal, penalties for possessing and dealing synthetic drugs would be enhanced and treated the same as the illegal drugs they mimic. The bill passed out of the House of Representatives and now moves to the Senate for consideration.