Gutwein said his legislation would require questions regarding the status of veterans and surviving spouses to be included on applications for drivers’ licenses and permits, and state identification cards. The Indiana Department of Veterans Affairs would be able to access this information to target veterans and their families when promoting outreach programs.

“There are approximately 400,000 veterans currently living in Indiana, but many are unaware of available programs,” Gutwein said. “By asking them two simple questions, we can identify these individuals, make them aware of resources available and help the IDVA improve current programs.”

Under this legislation, Gutwein said the IDVA could request and verify the names of those who have indicated their veteran status from the Bureau of Motor Vehicles. Gutwein said this cross-information sharing would add a measurement for accountability that could be helpful in preventing fraudulent veteran claims. 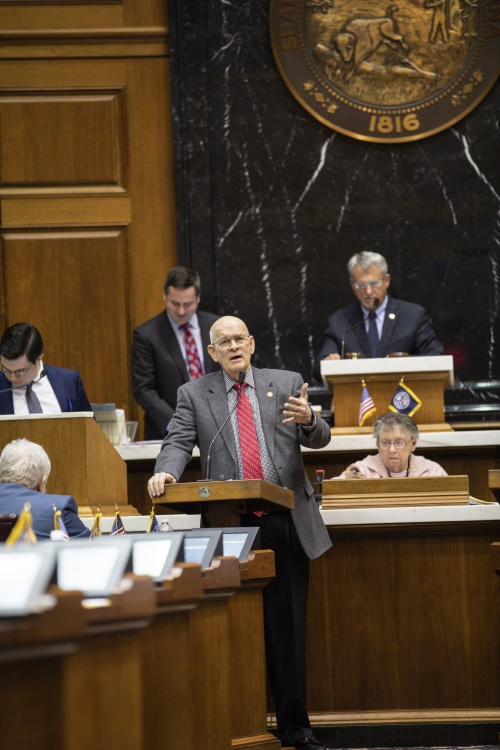 PHOTO CAPTION: State Rep. Douglas Gutwein (R-Francesville) presents his legislation to help Hoosier veterans Thursday, Jan. 31, 2019, in the House Chamber. Under Gutwein’s proposal, questions regarding veteran status would be added to driver’s license applications for the state to identify and better target veterans with available programs and resources. The bill received unanimous support in the House of Representatives and can now be considered by the Senate.