STATEHOUSE (March 25, 2019) – Gov. Eric Holcomb Monday at the Statehouse signed legislation sponsored by State Rep. Douglas Gutwein (R-Francesville) into law that could help save the lives of Hoosier babies.

The bill adds Krabbe, a rare genetic disease that breaks down the nervous system, to Indiana’s newborn screening panel. According to Gutwein, symptoms of this disease develop within the first 6 months of a baby’s life and usually result in death by age 2.

“There is no cure for Krabbe, but there are treatment options available for children diagnosed before symptoms appear,” Gutwein said. “However, once the symptoms show up, it is too late. That’s why early detection through newborn screening is so critical.”

Gutwein was joined at the signing by Bryce Clausen and his parents, Joel and Andrea Clausen. Bryce, an Indianapolis 1 year old, was diagnosed with Krabbe at just 6 months old. Since he was not screened for the disease at birth, his diagnosis came too late for him to be eligible for treatment.

“I cannot say enough about the Clausen family,” Gutwein said. “They know this legislation won’t save their son, but they fought for it regardless so other babies born with this condition have a chance at a better life. Had they not had the courage to share their story, ‘Bryce’s Bill’ may have never happened. They are an inspiration to us all.” 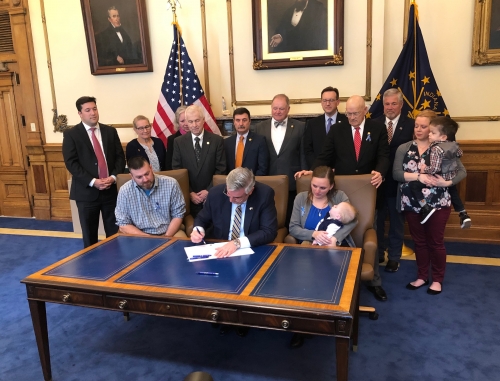