STATEHOUSE (March 19, 2019) — The House of Representatives voted unanimously Tuesday in support of legislation sponsored by State Rep. Douglas Gutwein (R-Francesville) that could save the lives of Hoosier babies by adding new tests to Indiana’s newborn screening panel.

Gutwein’s proposal would require Krabbe, along with Pompe disease and Hurler syndrome, to be added to the list of screenings Hoosier newborns receive shortly after birth. Krabbe is a rare genetic disease that destroys nerve cells in the brain and throughout the nervous system. According to Gutwein, there is no cure for this disease, and the life expectancy for children with Krabbe is 2 years of age.

“Babies who have this debilitating disease often live in extreme pain,” Gutwein said. “Once symptoms show up, there is nothing their families can do to stop the condition from progressing. Children treated with stem cell transplants have shown some improvement in their quality of life, but the key is early detection.”

This legislation, also known as “Bryce’s Bill,” was inspired by Bryce Clausen, an Indianapolis 1-year-old, who was not tested for Krabbe at birth. Since his diagnosis came after the onset of symptoms, he is ineligible for treatment.

“No family should ever have to go through what the Clausens are going through,” Gutwein said. “Adding Krabbe to the newborn screening panel will not eliminate the disease, but it will give babies born with it and their families a chance to fight it.”

Gutwein led an effort last year to expand Indiana’s newborn screening panel to include spinal muscular atrophy, or SMA, and severe combined immunodeficiency, or SCID. Gutwein said Hoosier babies born with these conditions now have a chance at a better quality of life thanks to early detection.

Senate Enrolled Act 41 is now eligible for action by the governor. To learn more, visit iga.in.gov. 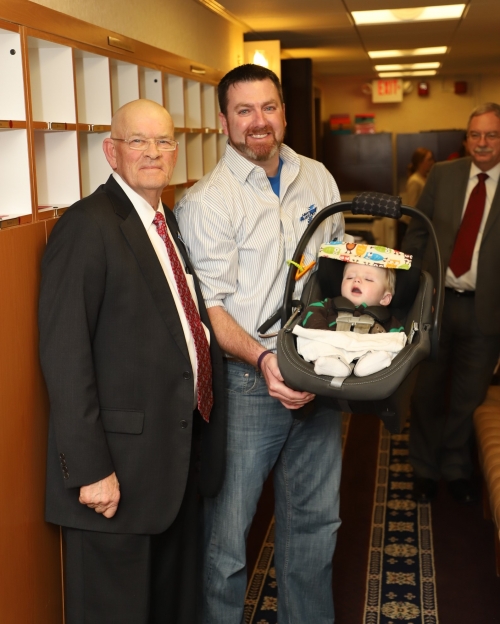 CAPTION: (From left to right) State Rep. Douglas Gutwein (R-Francesville) joins Joel Clausen and his son Bryce following a unanimous vote of support on legislation adding Krabbe, a rare genetic disease, to Indiana’s newborn screening panel. Bryce, an Indianapolis 1-year-old, was not tested for Krabbe disease at birth and is now ineligible for treatment. The bill sponsored by Gutwein now heads to the governor’s desk for further consideration and action.