STATEHOUSE (March 13, 2019) – Legislation sponsored by State Rep. Douglas Gutwein (R-Francesville) to help save the lives of Hoosier children recently passed out of the House Ways and Means Committee.

Krabbe is a rare genetic disease that destroys nerve cells in the brain and throughout the nervous system, often causing extreme pain, unexplained crying and developmental delays. According to Gutwein, there is no cure for this disease, and the life expectancy for children with Krabbe is 2 years of age.

Under this bill, Krabbe would be added to Indiana’s newborn screening panel along with two similar diseases, Pompe disease and Hurler syndrome.

“Currently, about 10 states test for Krabbe and other similar disorders at birth, including three of Indiana’s neighbors,” Gutwein said. “Researchers have discovered a treatment option that could significantly improve the lives of children diagnosed with this disease, so it is time for Indiana to join others and do all we can to give these babies a fighting chance at life.”

Gutwein said some infants who were treated early with stem cell transplants have shown improved outcomes. However, once symptoms begin, it is too late for treatment.

Gutwein said he learned of Krabbe after a news story about Bryce Clausen, an Indianapolis 1 year old, who was not screened for this disease at birth. Since his diagnosis came after the onset of symptoms, he is ineligible for treatment.

“If Bryce had been born in Illinois, Ohio or Kentucky, he would have been tested for Krabbe,” Gutwein said. “At that time, he would have received treatment and possibly had a much different, more positive outcome. The Clausen family faces a difficult road ahead, but their inspiring story and advocacy work will better ensure babies born with this disease in the future have a chance at a longer, more enjoyable life.”

Gutwein led an effort last year to add spinal muscular atrophy, or SMA, and severe combined immunodeficiency, or SCID, to Indiana’s newborn screening panel. Thanks to early detection through newborn screening, Gutwein said Hoosier babies born with these conditions now have a chance at a better quality of life. 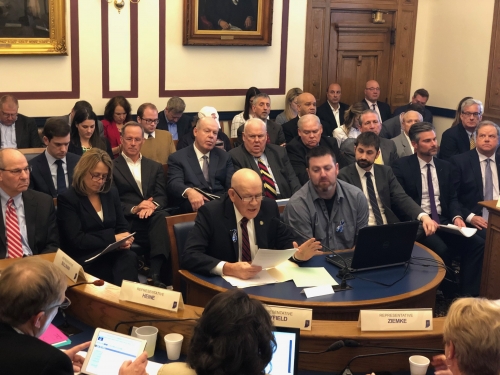 PHOTO CAPTION: State Rep. Douglas Gutwein (R-Francesville) presents legislation he is sponsoring to save the lives of Hoosier children to the House Ways and Means Committee Wednesday, March 13, 2019, at the Statehouse. Under this proposal, Krabbe, a rare genetic disease, would be added to Indiana’s newborn screening panel. After receiving unanimous support from the committee, the bill now moves to the House floor for further consideration.