“Ray and Janet have worked tirelessly to raise awareness about the warning signs of brain aneurysms,” Eberhart said. “An estimated 1 in 50 people suffer from a ruptured aneurysm, which makes the Morefield’s work critical to our community and our state. As people become aware of the warning signs, more lives can be saved.”

According to Eberhart, Ray Morefield’s wife and daughter suffered from brain aneurysms. This life-threatening situation prompted Ray to dedicate his time to raising awareness about brain aneurysms in the hope of increasing people’s knowledge of warning signs as well as increasing testing for the condition.

“We certainly thank Mr. Eberhart for the proclamation he presented us with,” Ray Morefield said. “This renews our enthusiasm to keep up the good fight. We appreciate Mr. Holcomb giving us a month for our cause. We are overjoyed, thank you so much.”

A brain aneurysm is a weak bulge or ballooning blood vessel in the brain which fills with blood. This can leak or rupture and cause bleeding in the brain. Warning signs include headaches or pain above the eye, which can be mild or severe based on whether the aneurysm ruptured or not. Eberhart said early detection is crucial because ruptured aneurysms can lead to death or permanent disability.

which includes Shelby County and portions of Bartholomew and Hancock counties.

A high-resolution photo of Eberhart can be downloaded by clicking here. 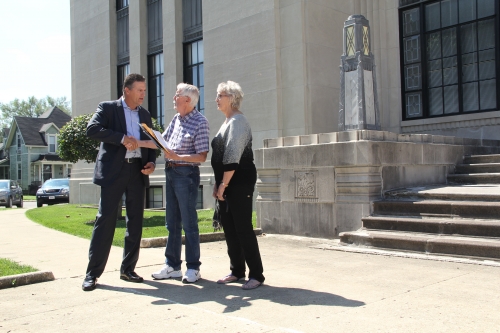