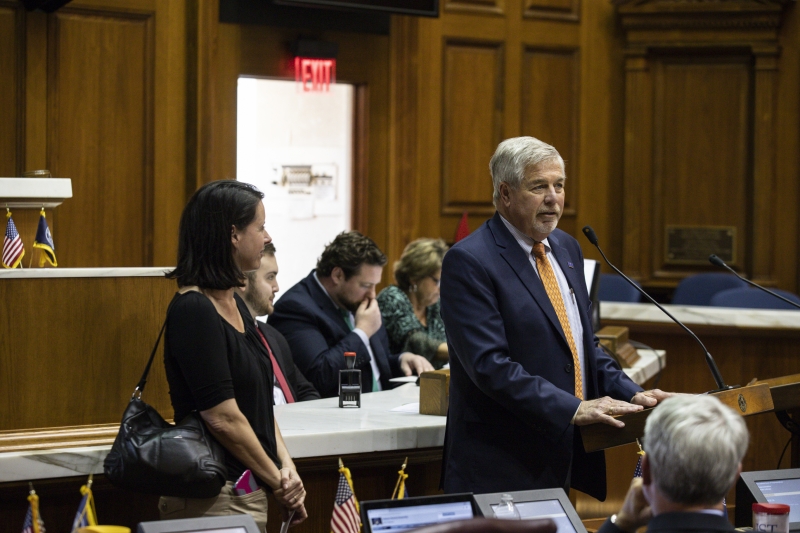 STATEHOUSE (April 10, 2019) — State Rep. Bob Cherry (R-Greenfield) at the Statehouse recently honored Indiana State Trooper Roy Edmond Jones who was killed in a crash when responding to a call while on duty July 3, 1979, near U.S. 36 in Pendleton.

Jones responded to a call just after midnight to help apprehend a fugitive fleeing in a vehicle. He was traveling at a high speed with lights and sirens on when a vehicle pulled out in front of him causing him to swerve and strike a tree, killing him on impact. He was 31 years old.

Cherry urged the Indiana Department of Transportation to rename a portion of U.S. 36 in memory of Jones.

“This tragic event left our community with a great loss,” Cherry said. “State Trooper Jones was known for living his life in the service of others. He deserves to be recognized for his contributions to Pendleton and Lapel, and be memorialized in this way.”

Jones served in the army during the Vietnam War and received a Bronze Star for Valor. He later joined the Indiana State Police in 1976.

According to Cherry, Jones was survived by his wife, daughter and two sons. The road name change would recognize the 40th anniversary of his passing.

which includes portions of Hancock and Madison counties.

CAPTION: State Rep. Bob Cherry (R-Greenfield) (right) welcomes Jennifer Jones Byers (left) to the Statehouse where he honored her late father, Indiana State Trooper Roy Edmond Jones, Monday, April 8, 2019, in the House Chamber. Cherry urged the Indiana Department of Transportation to rename a portion of U.S. 36 in memory of Jones, who was killed in a crash while on duty July 3, 1979, near U.S. 36 in Pendleton.